In the latest edition of Lonely Planet’s Ultimate Travel List, Ireland has 8 experiences listed and featured in the worlds top 500 “most thrilling, memorable and interesting travel experiences, with the Wild Atlantic Way proudly coming in at 21.

In what has been a truly unprecedented year for travel and tourism, this accolade is some positive news for overseas tourism to Ireland as it will hopefully ensure that Ireland stays front-of-mind with travelers around the world, until such time as we can visit again.

Here are the eight best places & experiences in Ireland Lonely Planet thinks you should visit: 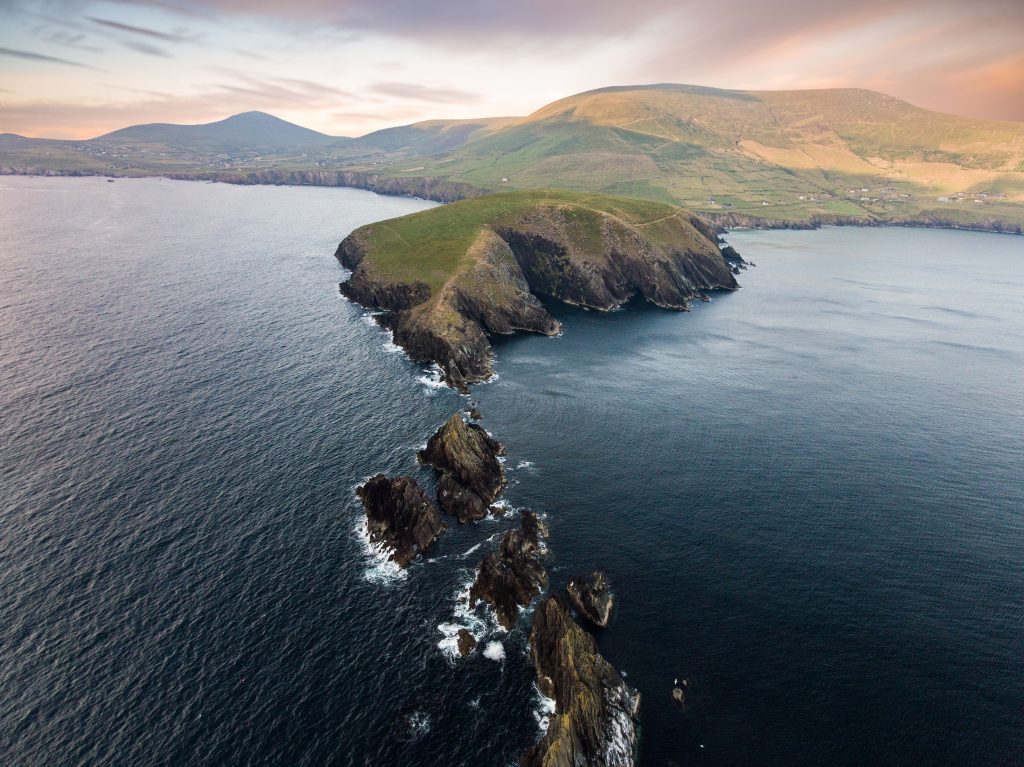 The Wild Atlantic Way, which landed in 21st place, is the highest-ranking Irish destination on the list.

The Wild Atlantic Way, 1600 miles (2600 km) in length, is one of the longest defined coastal routes in the world. It winds its way all along the Irish west coast from the Inishowen Peninsula in the north down to the picturesque town of Kinsale, County Cork, in the south. The scenic coastal route along Ireland’s western coast and features breathtaking sea cliffs, beaches and mountains, and is one of wild, rugged beauty.

Officially launched in 2014, the route includes over 1,000 attractions, heritage sites,  and discovery points, including three locations (Ring of Kerry, Connemara, Sliabh Liag) that made this list.

Top Tip: Try and stay in the small towns and villages along this route. This is where you’ll have a true Irish Experience with the locals. We believe that travel has the power to transform lives. Local experiences facilitate meaningful interactions between travelers, locals and nature. Travelers become inspired, locals empowered which in turn helps communities and local businesses thrive. 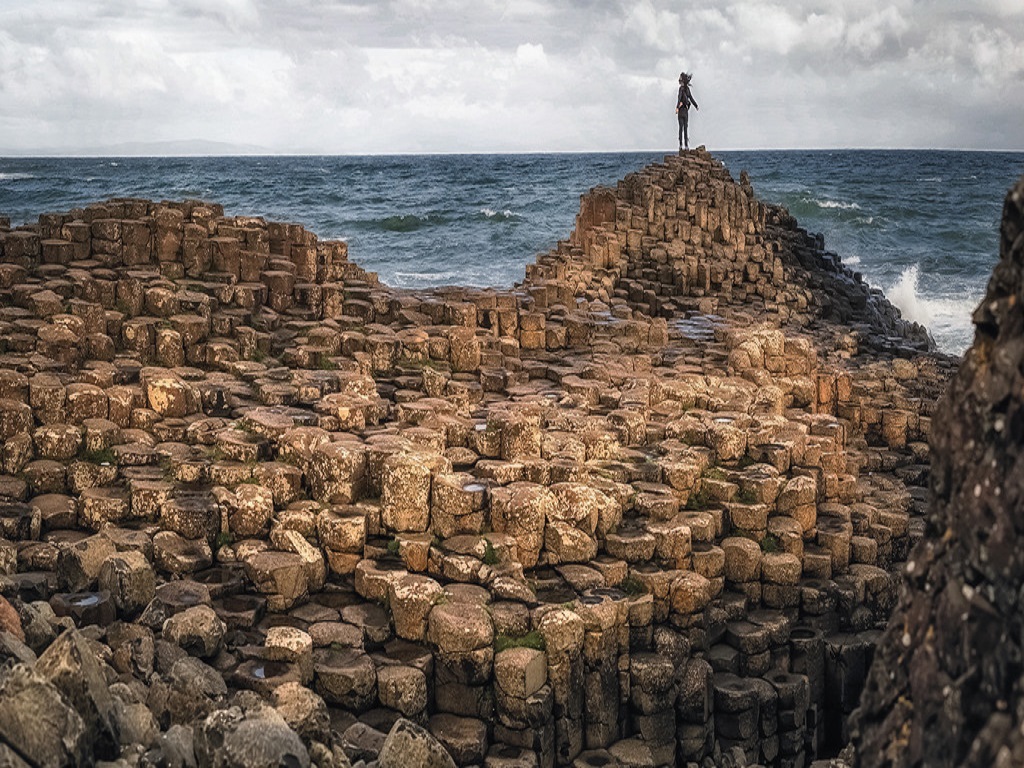 Giant’s Causeway, is a promontory of basalt columns along 4 miles (6 km) of the northern coast of Northern Ireland. It lies on the edge of the Antrim plateau between Causeway Head and Benbane Head, some 25 miles (40 km) northeast of  Derry. There are approximately 40,000 of these stone pillars, each typically with five to seven irregular sides, jutting out of the cliff faces as if they were steps creeping into the sea.

The Giant’s Causeway, on the Antrim coastline, is considered the most popular attraction in  Northern Ireland. Pre-COVID, the spectacular and unique landscape attracted over 1 million visitors a year.

Although the coastline was reputed to have been created by a volcanic eruption around 60 million years ago, however, according to Irish mythology, the warrior-giant Fionn Mac Cumnhaill created the stepping stones as a bridge between Ireland and Scotland.

Top Tip: To get away from the crowds take the clifftop experience beginning at Dunseverick Castle, the walk covers five spectacular miles of wonderfully wild and rugged coastal scenery along grass and gravel paths, offering walkers the opportunity to see much more of the World Heritage Site than most people even know exists!

3. The Ring of Kerry 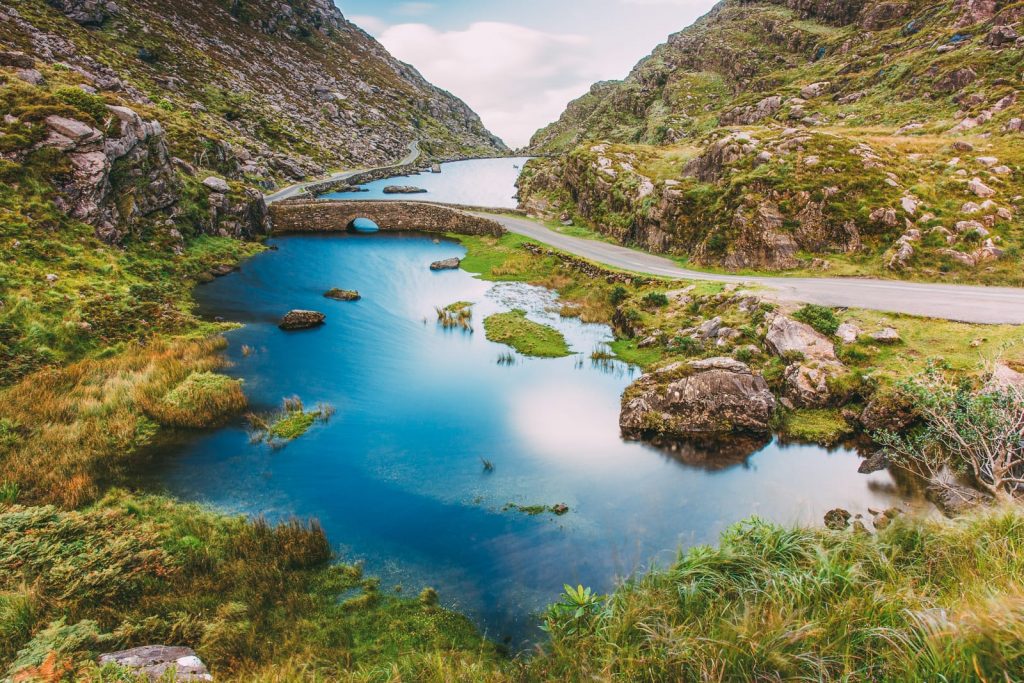 The Ring of Kerry is a 179km circular route of road, around the Iveragh Peninsula in County Kerry, in the south-west of Ireland.  Along this scenic drive, you’ll find dazzling opulence and breathtaking wilderness in equal measure. Wherever you go, you’ll be tempted to keep a camera on hand; but take it from us – just drinking it in and enjoying the moment is more than enough.

Top Tip: Divert off the Ring of Kerry route and take the road to Portmagee and Valentia Island. Here you will have an abundance of top experiences to enjoy. The Kerry Cliffs, the Skellig Ring, Bray head walk, boat tours to Skellig Michael and Valentia Slate quarry. 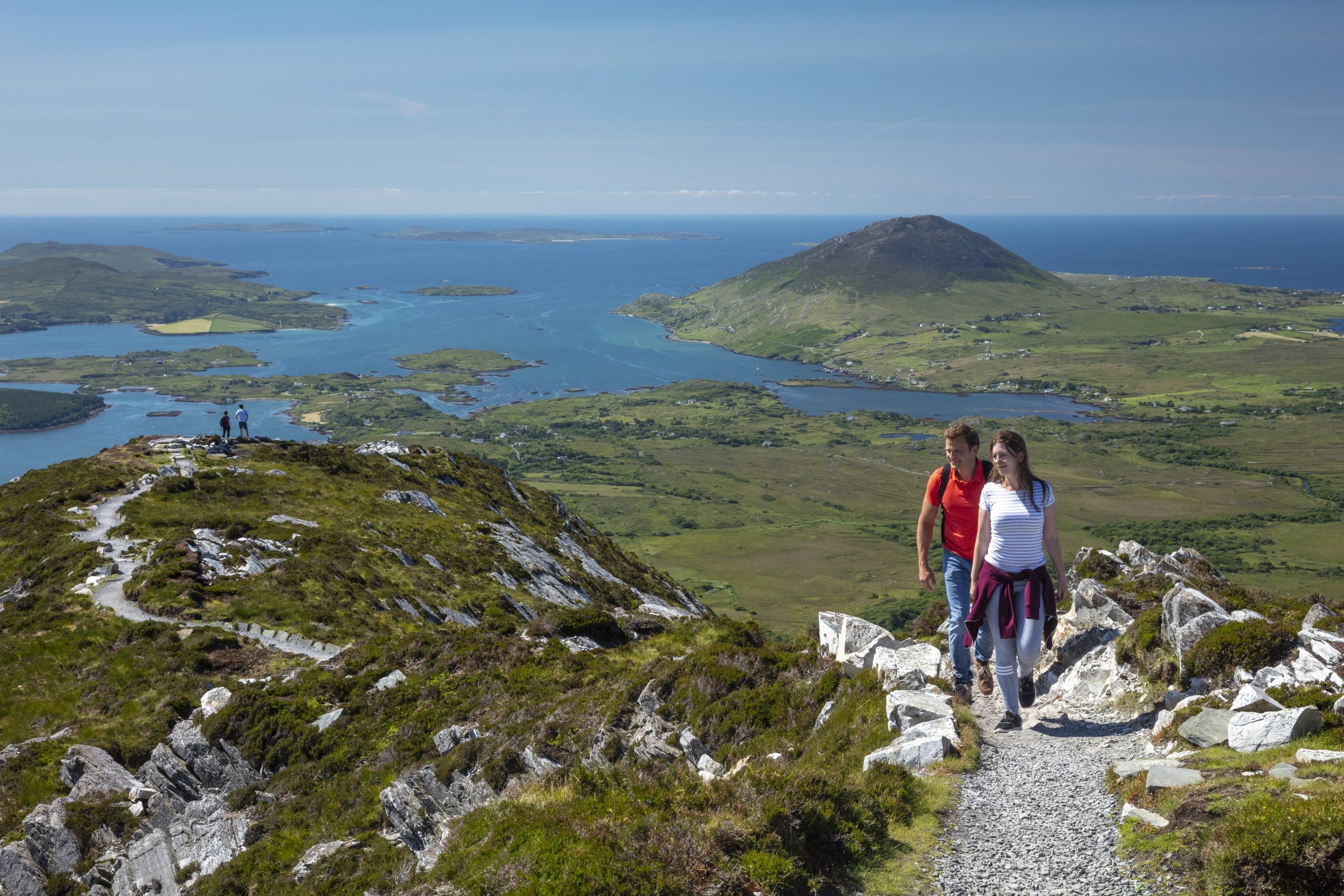 Dubbed a place of “savage beauty” by Oscar Wilde, the striking region of Connemara has been a landmark destination for anyone looking to experience authentic Ireland for many years

Located west of Galway in the rugged west of Ireland, this region is made up of beautiful landscapes of lakes, mountains and boglands. Passing through the desolate yet beautiful Doo Lough and Delphi Valleys, the landscape tumbles down to the dark waters of Killary Harbour, a stunning fjord framed by olive-coloured mountains. This romantic region, with its old stone walls, ponies and wild landscape is the very essence of Ireland. It is here where Irish language, song, dance and literature are all to be found in abundance. The coastline is made up of several peninsulas, and indeed, according to Lonely Planet, the name Connemara (Conamara) translates as “Inlets of the Sea.”

The Sky Road is a jaw-dropping scenic route located nearby the ‘capital of Connemara, Clifton. The circular route offers breathtaking views of the countryside,  cliffs, and shoreline. The picturesque Maumturk Mountains lie opposite the Twelve Bens mountain range on the other side of the remote Inagh Valley in the heart of the Connemara region.  An abundance of scenic hiking and biking trails offers superb views of the countryside.

Top Tip: A trip to Connemara National Park is a must, for a hike up Diamond Hill. Enjoy spectacular views of the regions rivers, lakes, mountains and coastal islands. On the west coast of Connemara lies Roundstone, an area of outstanding natural beauty.  Described many times as a “botanist’s delight” where many wild flowers, rare to this country, are found. 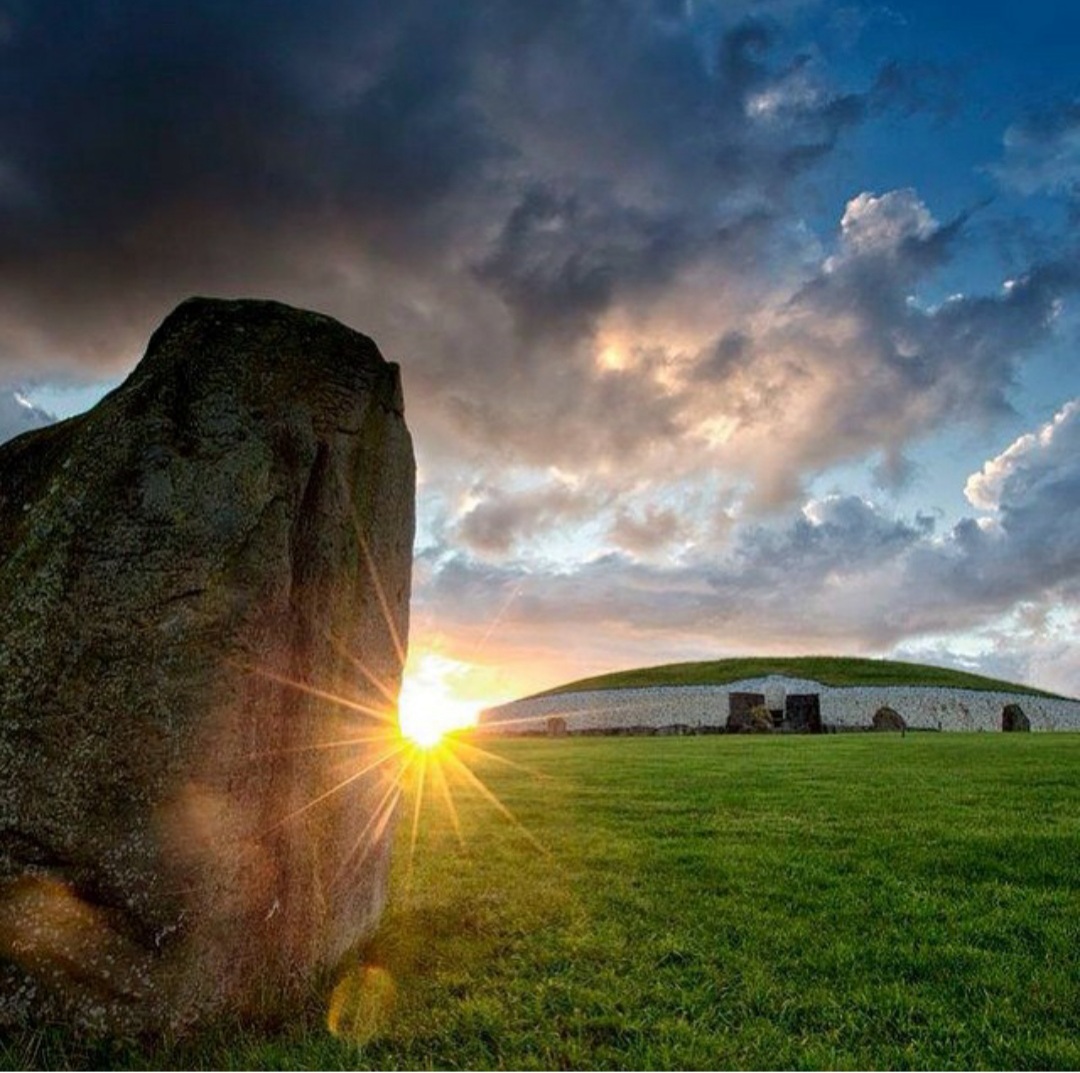 Prepare for a sunrise like nowhere else on earth at this UNESCO World Heritage Site on the banks of the rolling River Boyne. For over 5,000 years, Brú na Bóinne has cradled secrets borne of Neolithic ingenuity, hidden within sacred artwork and subterranean depths. Before the Pyramids emerged from the sand or Stonehenge stood tall, this place was home to farmers and families, people intent on leaving their legacy on Ireland’s landscape

Brú na Bóinne (Palace of the Boyne) in Co. Meath is home to over 90 Neolithic monuments. Designated a World Heritage Site by UNESCO  in 1993, the area contains the largest collection of megalithic art in Western Europe.

Sitting within the bend of the River Boyne,  it is the home to three well-known megalithic ancient passage tombs—Newgrange, Knowth, and Dowth.

Newgrange is the most famous of these. Built over 5,000 years ago, it is older than the Great Pyramid of Giza in Egypt.  Every winter solstice at dawn, if conditions are right, a narrow beam of light enters the passage tomb and illuminates the chamber.

Top Tip: The Boyne Valley is like an open air museum and a great way to explore this region is in an open boat with local guides, such as Boyne Boats Adventure. Just outside the small town of Slane is the lesser known Hill of Slane,overlooking the Boyne Valley and its ancient burial mounds, this hill is the site of St. Patrick’s first call to the people of the region to convert. Today, the view is spectacular. The hill is crowned with the ruins of an ancient monastery. Well worth the brief drive up, when visiting Newgrange or other historic sites in the area.

Located in south-west Donegal along this magnificent costal driving route are Ireland’s highest Sea Cliffs, Sliabh Liag or Slieve League. There are terrific views of the Atlantic Ocean, the Sligo Mountains and Donegal Bay as you walk towards the terrifyingly high top of Sliabh Liag, where the cliff face of Bunglas rises over 600m above the raging ocean. These sea cliffs are nearly three times the height of the more famous Cliffs of Moher in Co. Clare.

Sliabh Liag is a walker’s paradise and offers various trails for different skill and fitness levels. The famous One Man’s Path loops around onto the Pilgrim’s Path and is not for the faint-hearted.

Top Tip: Brave the One Man’s Path and experienced walkers will reach the summit of the majestic cliffs, where they can gaze over the sea from a high vantage point and soak up the terrific panoramic views of the Atlantic Ocean, the Sligo Mountains and Donegal Bay. Having viewed the breathtaking cliffs from the top, it’s now time to see them from the sea. Many would agree that seeing the majestic cliffs from the sea is an even more stunning view, as they rise up out of the water to provide nesting grounds for the many sea birds in the area. 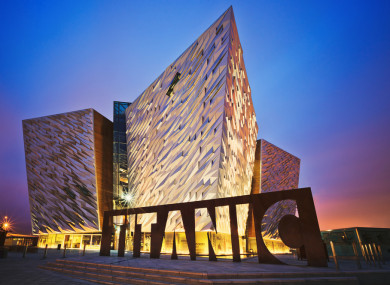 Titanic Belfast, named the World’s Leading Tourist Attraction at the prestigious World Travel Awards in 2016, is located beside the Titanic Slipways, the Harland and Wolff Drawing Offices and Hamilton Graving Dock, the very place where Titanic was designed, built and launched in 1912.

Titanic Belfast tells the story of the Titanic, from her conception in Belfast in the early 1900s, through her construction and launch, to its maiden voyage and subsequent place in history.

The self-guided Titanic Experience extends over nine interpretive and interactive galleries, which explore the sights, sounds, smells and stories of RMS Titanic, as well as the city and people who made her. The museum tells the captivating story of the Titanic, which sank on April 15, 1912, after colliding with an iceberg.

Top Tip: The Great Light is located on the new Titanic Walkway, a 500 metre walkway on Victoria Wharf, which connects the Titanic Slipways to HMS Caroline and the Thompson Dock, giving visitors the perfect opportunity to learn about the maritime and industrial heritage of the area on their way to the Great Light. 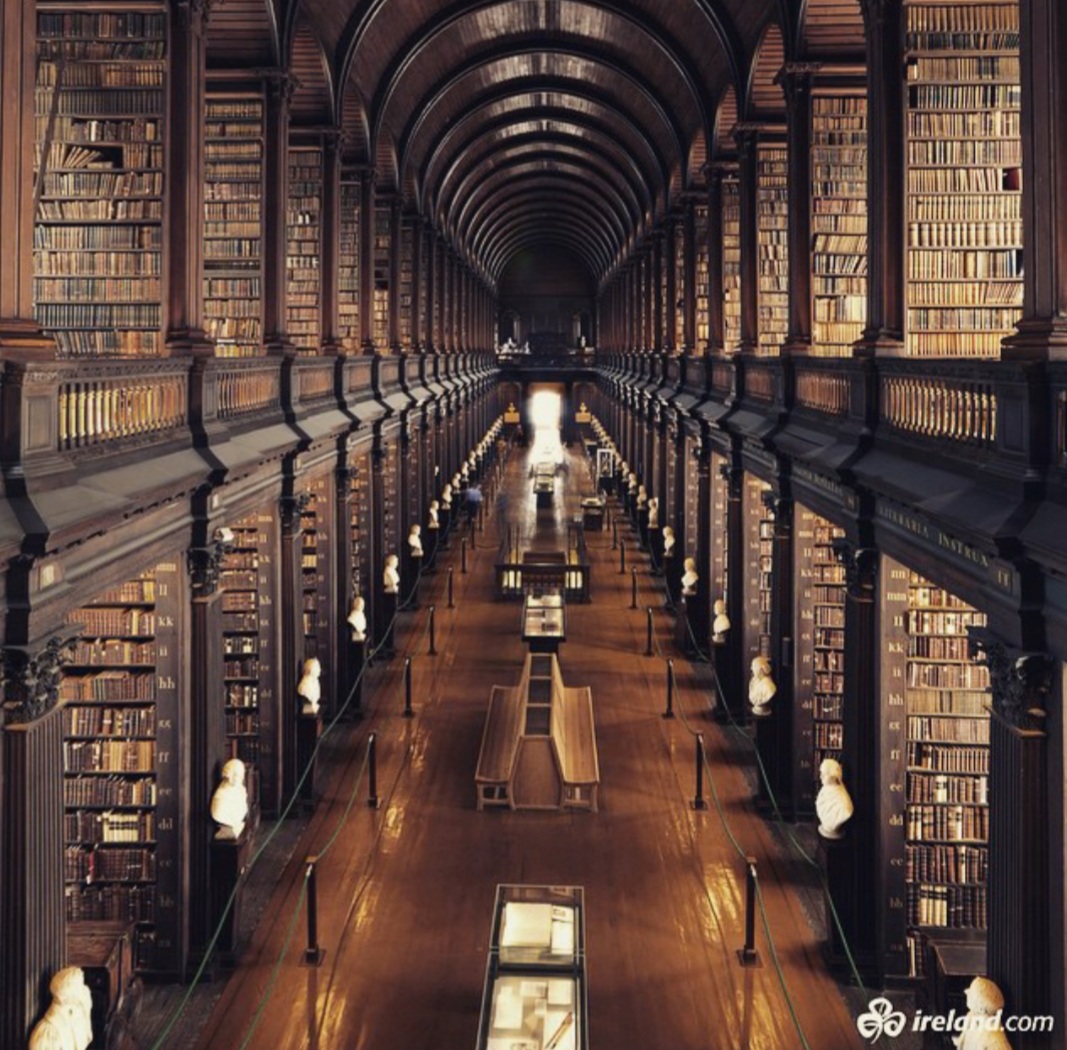 Trinity College in Dublin was founded in 1592 by Queen Elizabeth I and is Ireland’s oldest surviving university.

The most famous item in the collection is the medieval illuminated manuscript known as the Book of Kells, which was added to the library in 1661. With a backstory that includes monks, Vikings and remote Scottish islands, the Book of Kells will make the hairs on the back of your neck stand on end.

Located within Trinity College’s Treasury, the tour here includes a visit to the Long Room library, one of Europe’s most magnificent libraries it holds the collection’s 200,000 oldest books, including a rare copy of the 1916 Proclamation of the Irish Republic.

Afterwards, wander around the charming campus of Trinity, which dates back to 1592 and boasts an impressive list of alumni including Bram Stoker, Oscar Wilde and Jonathan Swift. The Front Square and Campanile are a delight, while the college also houses the modern Science Gallery, and the Douglas Hyde Gallery, with changing contemporary art exhibitions.

Top Tip: Check out the the so-called ‘Brian Boru harp’, now kept in Trinity College Dublin (hence its other name, ‘the Trinity harp’), has long been claimed to be the harp of Brian Boru, the harp actually dates from the fourteenth or fifteenth century. Brian Boru is celebrated as a patron of the arts and is often thought to have played the harp.  Given his prominence as a figure in medieval Ireland, it is hardly surprising that one of the three harps surviving from medieval Ireland became associated with him.

If you’re interested in touring Ireland’s Wild Atlantic Way with us, check out our relaxed experience tour, the 10 Day Wild Irish Experience Tour.